Starting in a small garage across the street from its current 28,000 sq. ft. location in Idaho Falls, Idaho,
Rocky Mtn. Ropes is the original brand of Cowboy Cordage Inc., opening its doors in early 1980,
and later filing its corporate name as Cowboy Cordage Inc. Created by Steve and Allison Geisler,
below is the story of their family and their brands from the beginning to today. 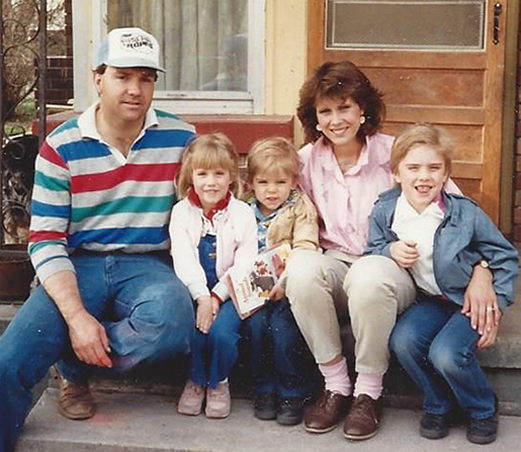 The Geisler’s at home on their porch where Rocky Mtn. Ropes began. Photo taken April 1987. 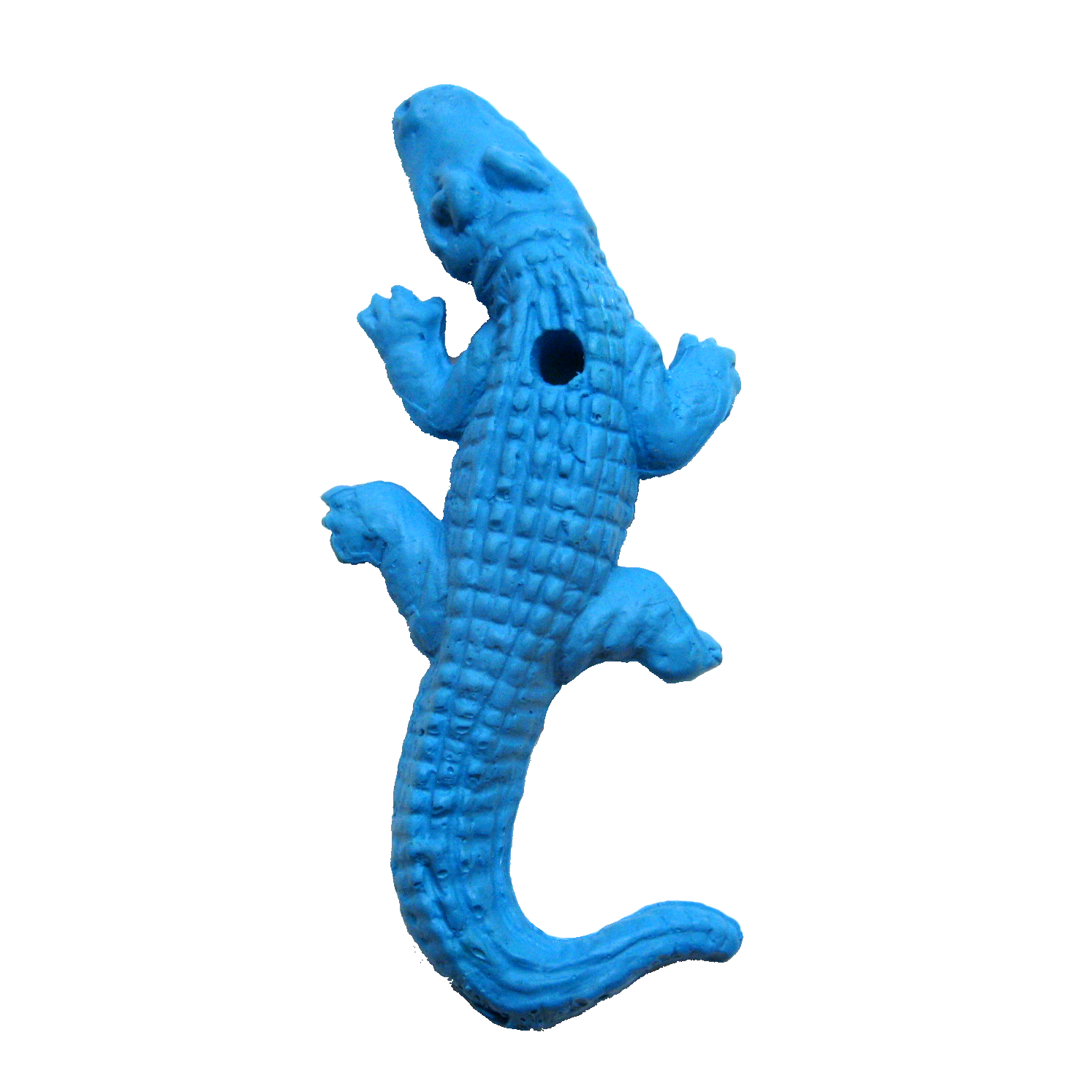 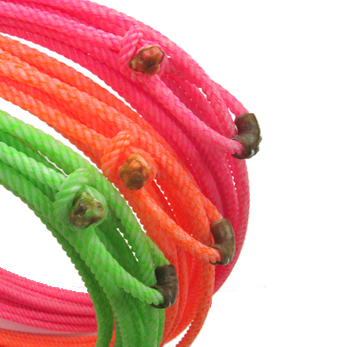 After starting in Idaho Falls, Idaho in a small garage across the street from its current location today, Rocky Mtn. Ropes was relocated to Oklahoma in 1987 opening its first store front in Duncan. Rocky Mtn. Ropes remained in Oklahoma until 1992 at which time it returned to Idaho Falls.

Meanwhile, a business partnership between Steve and Allison Geisler and Alvin and Judy Wagner of Helena, Montana, led to the creation of Gator Ropes in 1987. The Wagners bought the brand and had sole ownership from 1989 until 1999 at which time the Geisler’s purchased Gator Ropes and returned it to Idaho Falls.

Also during this time, the WonPad saddle blanket was created by Rocky Mtn. Ropes’ founder, Steve Geisler (1992). He needed a saddle blanket that didn’t freeze in the harsh Idaho winters, and one that could be easily cleaned from sweat and dirt and hung up to dry. Still manufactured here in Idaho, thousands of these saddle blankets ship out of our warehouse each year.

In 2001, Cowboy Cordage Inc. partnered with Industrial Liaison Inc. which opened the doors to Eagle Rock Equine Supply, WonBoot, and WonCinch. This past fall, these connections were utilized even more when our product lines were expanded to include a full line of grooming, tack, and trailer supplies.

The partnership of Industrial Liaison Inc. also offered access to Uoza poly rope increasing the availability of poly ropes in both calf and ranch ropes. Over the years, several new colors and styles have been added including the very popular 4 strand, black/white/silver speckle in 9.5mm.

Steve then had the opportunity to purchase Magnum Ropes. Originally founded in 1997 by Rex Anderson and 2 business partners, Magnum Ropes claimed Vernal, Utah as its home. In 2003, Cowboy Cordage Inc. bought Magnum Ropes and moved it to Idaho. Rex continued to work with the brand until the summer of 2013.

In 2001, Steve secured another source of poly, Synco, to increase the selection of colors, as well as supplement the increasing demand. Synco added a large selection of 3 strand poly including blue, red, red-white-blue twist, and our new tri-lead (heavyweight) poly.

In 2004, borrowing technology from decades of research in the competitive shooting industry, Steve created four ropes in custom neon hues scientifically proven to increase visibility in all light conditions, but specifically in low light and indoors. This was the beginning of RoperVision which continues today with all four bright colors.

The very next year, Steve created a long ranch rope machine to be able to spin ropes up to 60’ in length. This was the beginning of the Open Range Ranch Rope line which continues today with 4 different series including Original, Eclipse, 2-Tone, and the new 100% Nylon.

Steve, and his wife Allison have spent the last 30 years building their business and raising their family. Today they are both still involved, with Steve constantly developing new products and Allison managing a variety of office tasks.

Their oldest son Ben recently retired from the Army, and currently lives in Alabama with his wife Brit and his son Harrison. He owns and operates a custom leather shop. 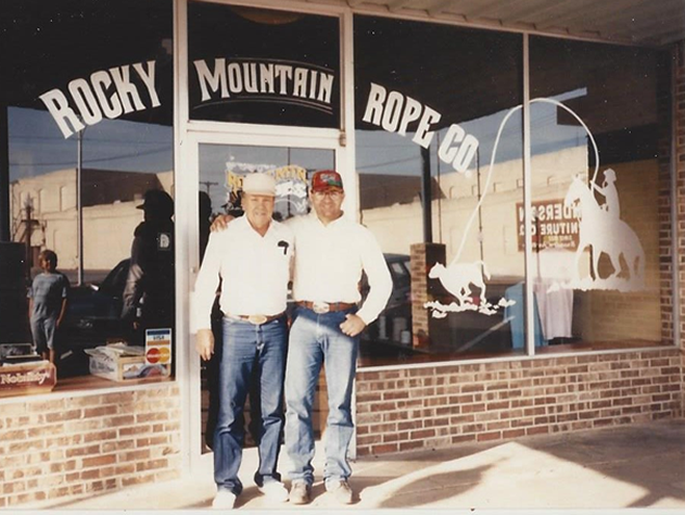 Blair Geisler (Steve’s father) and Steve Geisler in front of the first store front for Rocky Mtn. Ropes, located in Duncan, Oklahoma in 1987. 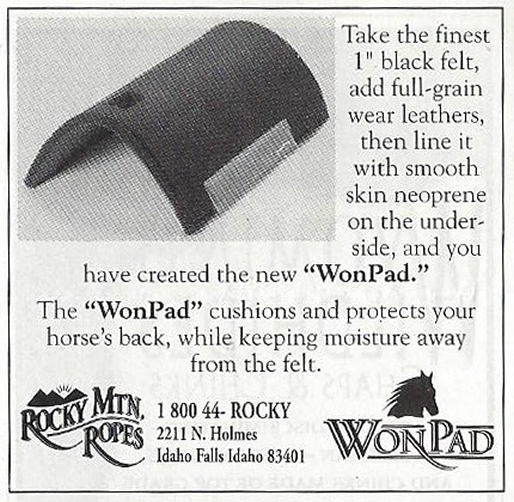 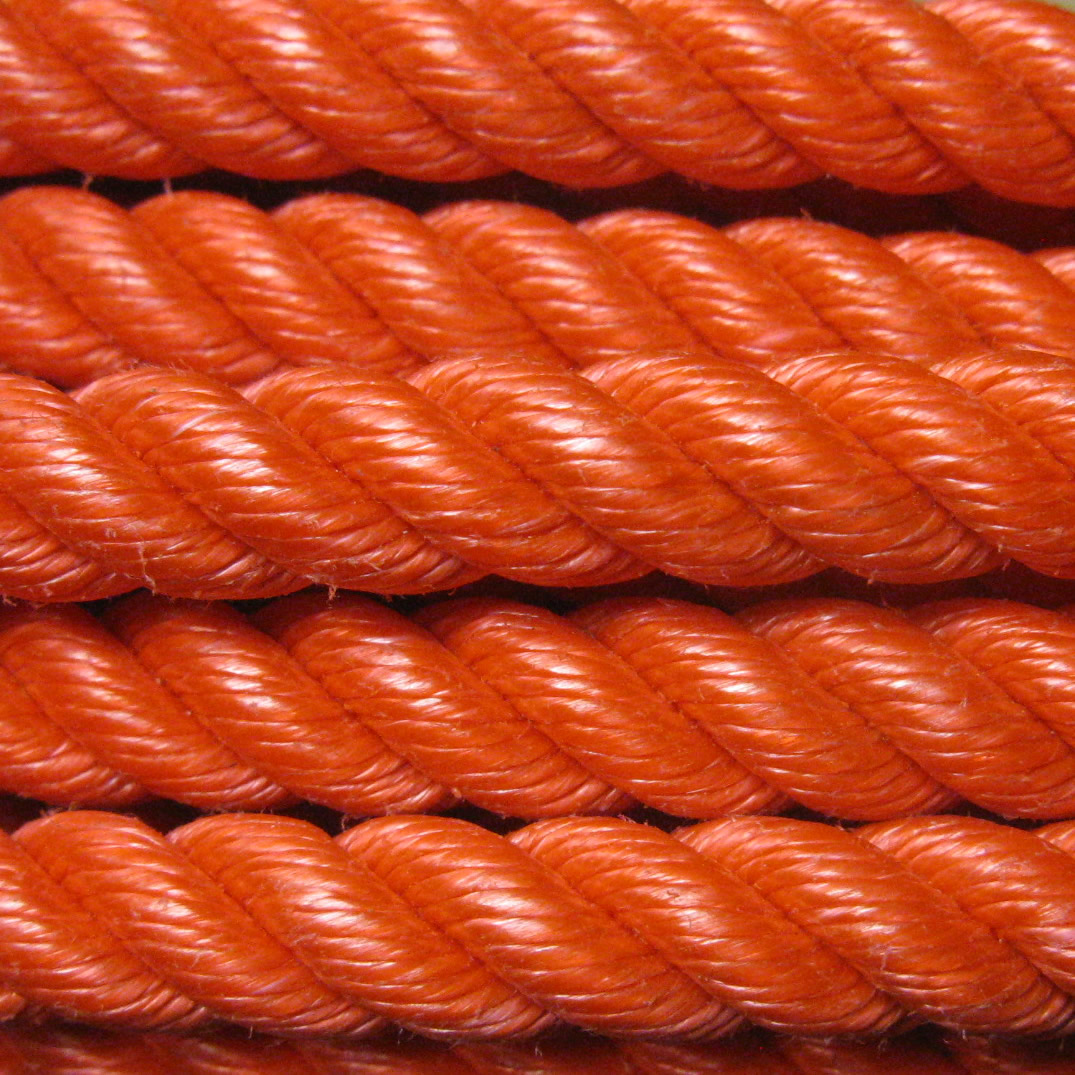